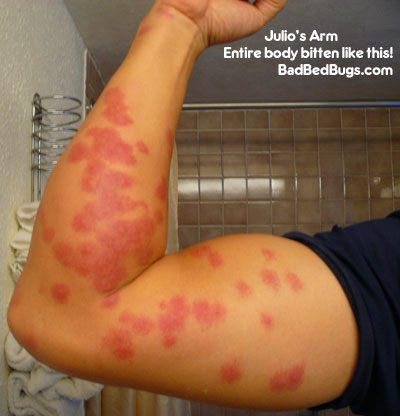 . For this reason the parasites, which live on a diet of blood from animals and birds exclusively, are more common in hotels, motels and apartment buildings than they are in private homes and more likely to be found in urban areas that in the countryside.

It was only recently that bed bugs became uncommon among a large segment of humanity. Even today there are large areas of the world where bed bugs have never stopped being common. It was only with the development of insecticides in the 1930s that the bug was driven from our beds. The use of DDT and similar products made the bed bug essentially extinct in the USA by the 1940s. But the pest lived on in the wild and elsewhere.

The dramatic increase in the number of reported cases of bed bug infestation in North America began in the late Nineties. The unwelcome return of this pest after a half century absence is not currently under control, with a reported 5 times increase in populations in recent years.

It is believed that there are a number of factors behind this new epidemic of bed bugs. The increase in international travel has been cited as one possible cause. Another widely cited contributory factor is new methods of pest-control. In the 1990s fumigators began to use bait to control cockroaches rather than pesticide sprays. The bait introduced poisons into the colonies. This process was found to be more effective and less intrusive than spraying and the use of insecticidal and other sprays was reduced to almost nil.

The discovery that outbreaks were popping up in geographically disparate locations led to the discovery of problems in the poultry industry. Epicenters in Delaware, Texas and Arkansas were found to center around poultry farming operations. Infected poultry were transferring insects and eggs onto the workers.

The infestation problem in New York City id particularly acute. In the 2004-2005 period the city saw the total number of reported cases of bedbugs in the last half of 2005 surpass by 20 per cent the total number of cases reported in all of 2004. Toronto, Canada, was added to the list 2004. Both outbreaks are thought to tied to the presence of large populations of international travelers.

A central difficulty in getting these numerous outbreaks under control is the resistance the insect has developed to the chemicals used in the cockroach sprays that were so prevalent in the 1950-1990 era. Deltamthrin resistance was found to have increased 260 times over the kill point found in the original studies of the chemical.

The spread of bed bugs is assisted by the growth in long distance travel and the concentration of humans in urban centers. International travelers pick up bed bugs when traveling in countries where the pest has always been present. National travelers and tenants pick them up in hotels, motels, schools, the workplace: anywhere we gather in crowds of individuals from diverse regions.

The EPA in the United States has called a summit to address the growing problem of bed bugs.

Get important information and details on the right ways to get bed bug control easy and fast! When you have all the tools you need to effectively achieve bed bug control, you will be able to start enjoying your sleep without itching.